The #ENDSARS Protest: Beyond Police Brutality In Nigeria 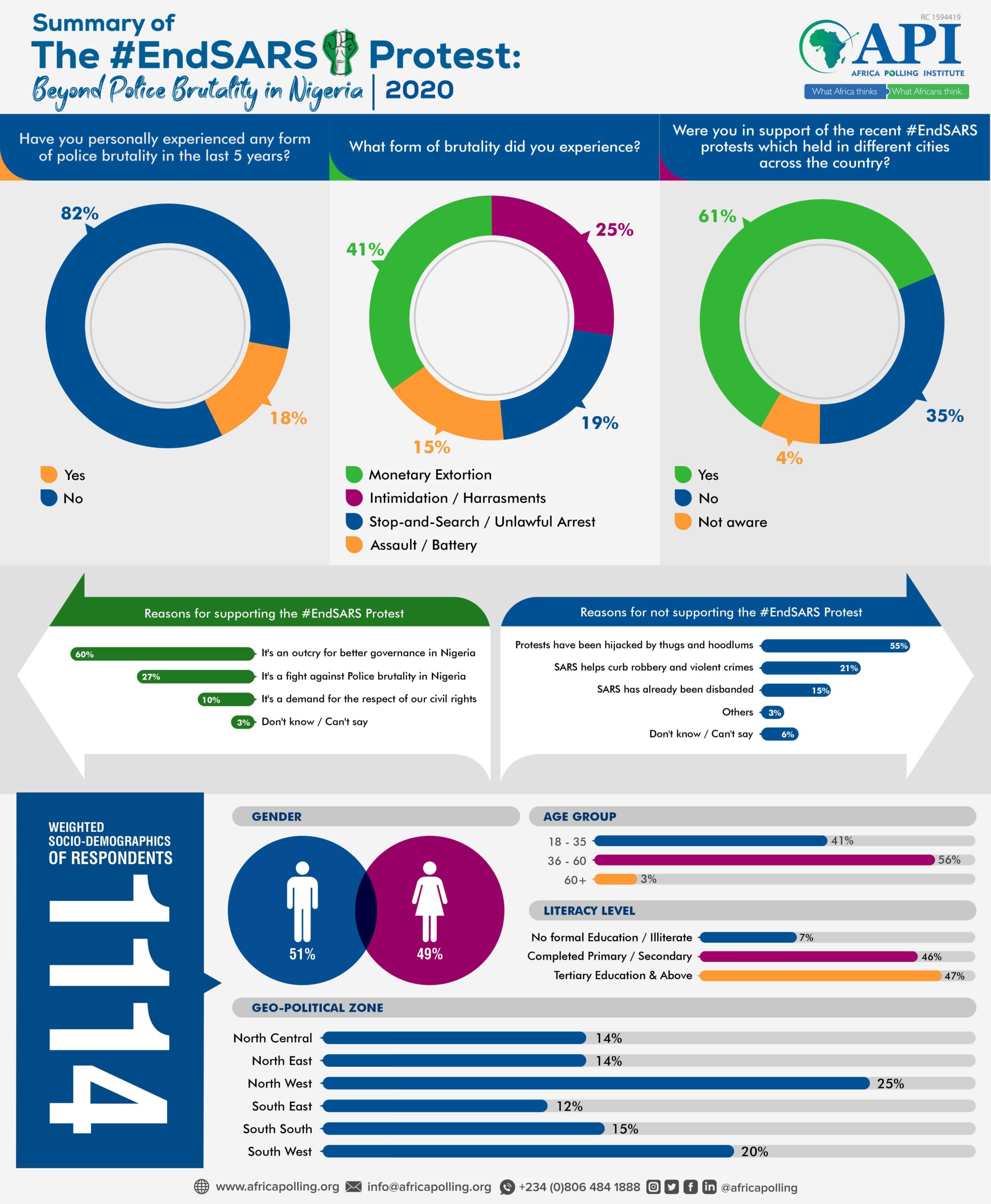 Abuja, Nigeria, October 29, 2020 – A new snap poll released by Abuja-based opinion research think-tank, Africa Polling Institute (API), on the #EndSARS protest has revealed that 6 in 10 Nigerians (61%) expressed support for the recent protest. The poll which was conducted to elicit the opinions of citizens on the recent #EndSARS Protest in Nigeria, appraised the crux of police brutality as epitomized in the shortcomings of the Special Anti-Robbery Squad (SARS) whose age-long misgivings recently snowballed into a series of protests across the country. Findings from the poll indicated that the protest gained significant support from citizens, not just as a campaign against police brutality (27%), but it was more of a public outcry for better governance in the country, as expressed by 60% of respondents.

Further findings revealed that protesters initially refused to back down due to public distrust towards government (43%), failure of government to fulfil past promises (28%), massive unemployment in the country (14%), public dissatisfaction with the current administration (12%), and idleness of student protesters resulting from the protracted industrial action of the Academic Staff Union of Universities (ASUU). In addition, 77% of Nigerians do not believe that the newly established Special Weapons and Tactics (SWAT) Unit will put an end to incidence of police brutality. Nigerians therefore urged the authorities to promote good governance and undertake a comprehensive reform of the Nigeria Police Force.

The nationwide poll was conducted in the month of October 2020, with interviews conducted via telephone, between October 21 and 27, using Stratified Random Sampling technique. A total of 1114 completed interviews were captured in the poll out of 3771 calls made, representing a response rate of approximately 30%. The sample consisted of 51% Male and 49% Female respondents, whose ages were 18 years and above. The interviews were conducted in five major languages: English, Pidgin, Hausa, Igbo and Yoruba; and geographic quotas were assigned to ensure the selection of a nationally representative sample, which proportionately covered all senatorial districts and states, including the FCT.

Form(s) of Police Brutality Experienced
Regarding the forms of brutality experienced by citizens, 41% expressed that they were financially extorted. This was followed by 25% who said they were harassed and intimated, while 19% said they were stopped, searched and unlawfully arrested, and 15% said they were physically assaulted. 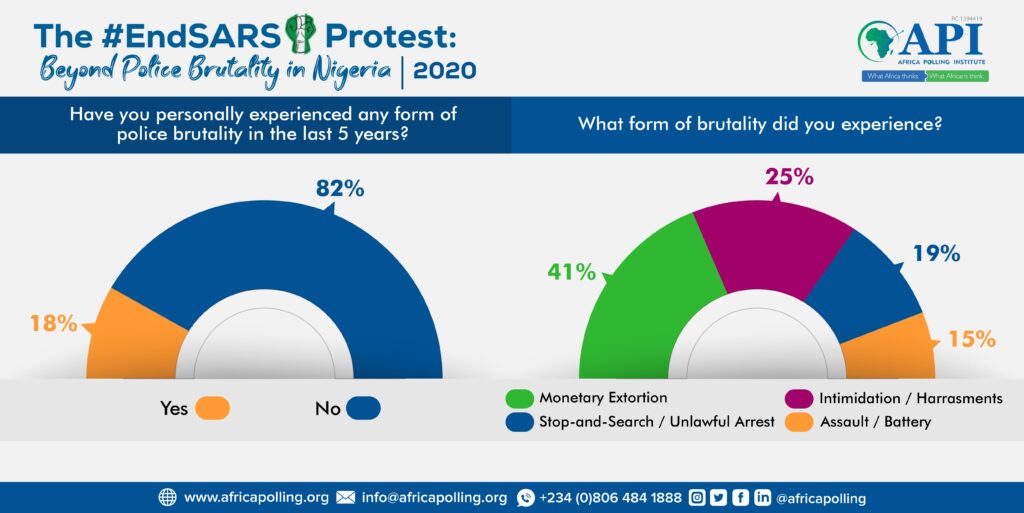 Support for #EndSARS Protest
Additionally, Nigerians were asked if they were in support of the #EndSARS protest that held in different cities across the country. The findings revealed that at least 6 in 10 Nigerians (61%) said they were in support of the protest. On the other hand, 35% said they did not support the protest, while 4% said they were simply unaware of any protest. The data further showed that there was more support for the protest amongst more educated Nigerians, as citizens with tertiary education and above (70%) expressed more support than those with no formal education (15%). Furthermore, there was more support from citizens resident in southern Nigeria (91%), than from citizens resident in northern Nigeria (35%). Interestingly, the data also revealed significant support from more elderly and adult Nigerians aged 60 years and above (70%) and 36 to 60 years (65%), than youths aged 18 to 35 years (53%). This finding highlights an important point signifying that, even though the protest may have been championed by the youths, they enjoyed significant support from the much older demography, who seem to opine that young people are finally waking up to lend their voice to the call for a better Nigeria. 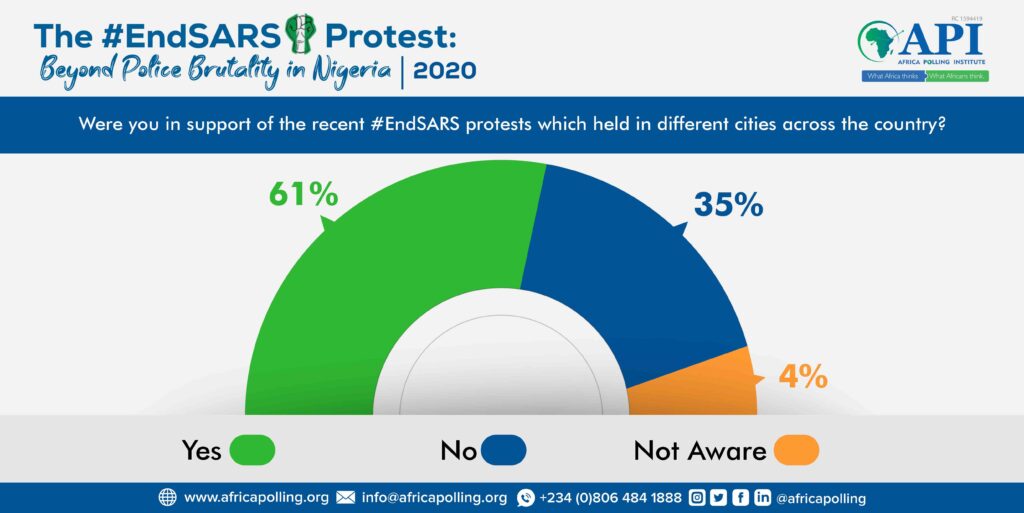 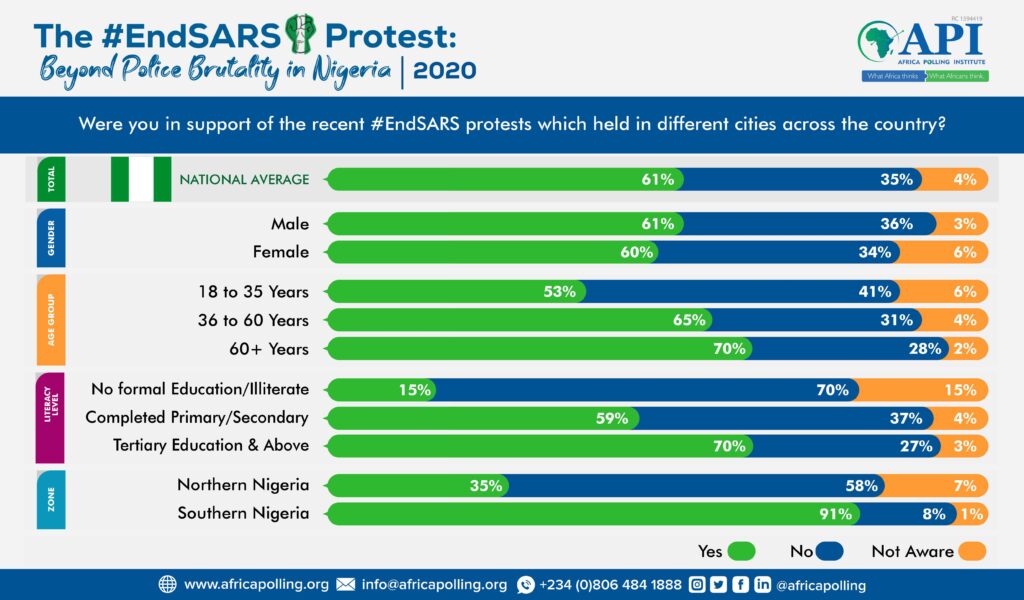 Reason for Supporting the Protest
Citizens were further probed on why they approved or disapproved of the #EndSARS Protest. From the findings, the 6 in 10 Nigerians who said they supported the protest highlighted the following reasons: it is a public outcry for better governance in Nigeria (60%), it is a fight against police brutality in Nigeria (27%), and a demand for the respect of civil rights (10%). Conversely, the 35% who did not support the #EndSARS protests stated the following reasons: the protest was hijacked by thugs and hoodlums (55%), SARS had been helpful in curbing robbery and violent crimes (21%), and SARS had already been disbanded (15%). 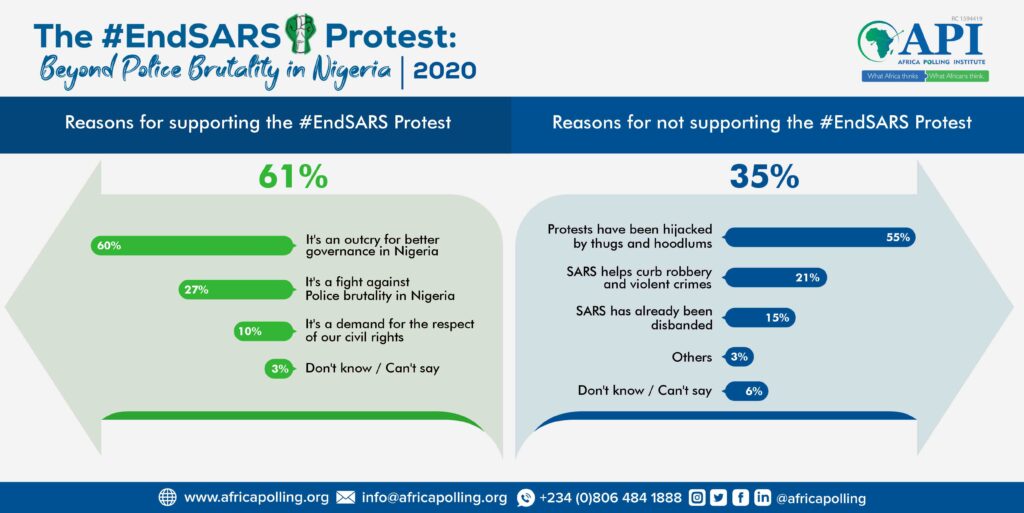 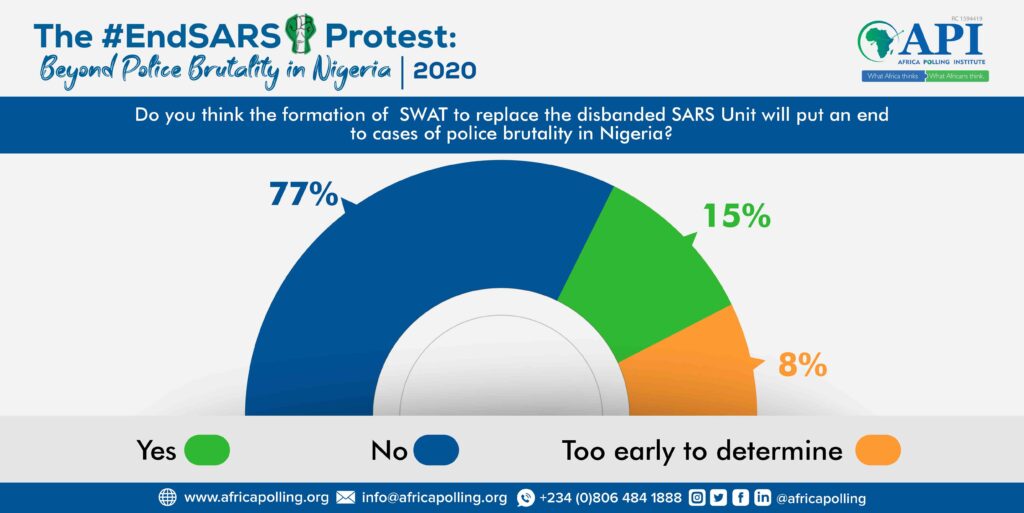 Reasons why the Protest Lingered
Lastly, the poll sought the opinion of Nigerians as to why the protesters remained adamant to calls for them to back down from protesting since the government began addressing some of their demands. From the findings, 43% of Nigerians highlighted the issue of trust deficit between citizens and the government; stating that the increase in public distrust towards the authorities was mainly responsible for why protesters refused to back down. This was followed by failure of government to fulfil past promises (28%), massive unemployment in the country (14%), public dissatisfaction with the current administration (12%), and idleness of student protesters resulting from the protracted industrial action of the Academic Staff Union of Universities (ASUU). 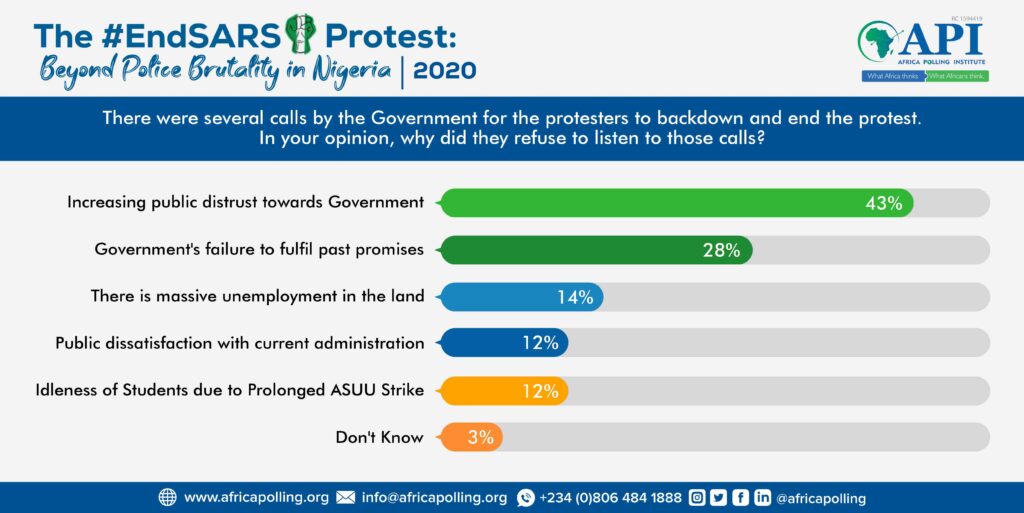 Policy Options for the Federal and State Governments
In concluding the poll, Nigerians were asked to proffer policy options that the federal government can undertake to respond to the demands of protesting youths. The findings revealed that Nigerians want the federal government to focus on policies aimed at: promoting good governance for better citizens’ welfare (38%), undertaking a comprehensive police reform (36%), involving younger citizens in the governance process (25%), sanctioning erring police and military officers (23%), and enabling state policing (22%).

Poll Summary
The snap poll has clearly articulated that the #EndSARS protest has significant citizens support, which goes beyond grievances against police brutality, but represents a general public dissatisfaction with the current state of the country and a clamour for good governance. However, it is important to state that the abysmal policing system as exemplified in the protest is one amongst plethora of instances of systemic failure on the part of the Nigerian state to provide meaningful governance to her populace. This is principally because, while there were genuine concerns from the protesters who desired a comprehensive overhaul of the police system, logical debates are prevalent that the millions of Nigerians who went to street were apparently either unemployed, unengaged or out of school as a result of the lingering industrial action of ASUU. These are thus, fallouts from ineffective governance that is supposedly expected to attend to the core of people’s need especially in the wake of the complex health emergency like the COVID-19. Again, the recent looting of food, agricultural and drug palliatives by ‘protesting youths’ in some states of the federation including the Federal Capital Territory has highlighted the scale and depth of poverty, hunger and social exclusion. Beyond the #ENDSARS protest therefore, this study and its outcomes have undoubtedly accentuated the dimensions of disconnection between the government and the governed, as it relates to the social contract.

5 thoughts on “The #ENDSARS Protest: Beyond Police Brutality In Nigeria”