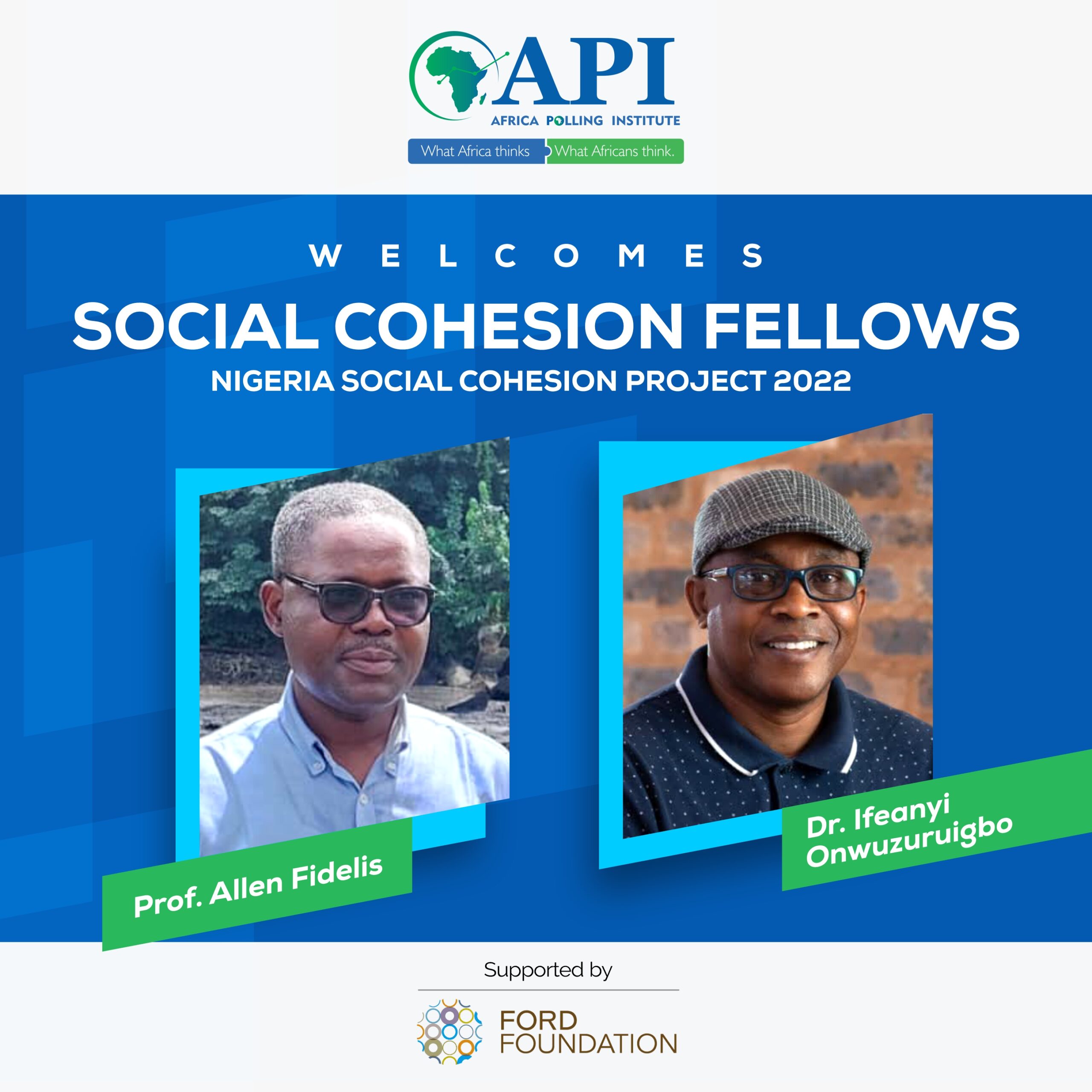 February 21, 2022, Abuja – Africa Polling Institute (API) wishes to officially announce the appointment of two Social Cohesion Research Fellows for the 2021/2022 Social Cohesion Project, supported by Ford Foundation. The Fellows are Professor Allen Fidelis and Dr. Ifeanyi Onwuzuruigbo, who have been selected from a pool of applicants, and after a rigorous review process, with both academics emerging as the two top scholars. The Fellows shall be providing part-time (non-residential) scholarly support to the Institute.

Professor Fidelis Allen who is a returning Scholar and Fellow of the Institute, is a Professor of Development Studies in the Department of Political and Administrative Studies, University of Port Harcourt. He currently heads the department. Previously, he directed the Centre for Conflict and Gender Studies of the University from 2015-2019. His latest publications include co-edited Decolonizing Colonial Development Models: A New Postcolonial Critique, published by Lexington Books.

Dr Ifeanyi Onwuzuruigbo holds a doctorate degree in Sociology. He is a member of faculty of the University of Ibadan where he teaches Sociology in the University’s Sociology Department. His area of specialty is Political/Development Sociology. However, his research interest straddles the nexus of security and development as well as peace and conflict studies. He has held Visiting Professorship/Research Fellowship positions in universities abroad and published his researches in several reputable scholarly journals.

It would be recalled that in 2019, API carried out the first Nigeria Social Cohesion Survey (NSCS2019). The survey amongst highlighted evidence of a broken social contract between the state and citizens, resulting into pockets of separatist agitations, civil unrests, heightened insecurity and violent crimes. It also highlighted the depletion of trust amongst citizens from different ethno-religious affiliations, as well as an overarching sense of social exclusion felt by many citizens. From the survey, 70% of respondents were of the opinion that the laws of the country do not apply equally to everyone, as there are certain persons above the law; 65% believe the government was not doing enough to promote a sense of inclusion for all citizens; and 45% thought Nigeria was much more divided in 2019 than it was in 2015. Hence, the need to embark on another round of survey to strengthen the research understanding and deepen the conversation on social cohesion in Nigeria.

In 2021, API also completed work on the 2nd round of the Nigeria Social Cohesion Survey (#NSCS2021), with expanded scope to cover a few other indicators – Corruption, Impunity, Gender and Natural Resource Governance. In addition to that, the Institute organized a One-Day National Social Cohesion Dialogue in Abuja, bringing together several stakeholders to discuss the subject of Social Cohesion especially in the light of survey findings from the data.

Africa Polling Institute (API) is an independent, non-profit, non-partisan opinion research think-tank which conducts opinion polls, surveys, social research, evaluation studies at the intersection of democracy, governance, economy, markets and public life; in order to support state and non-state actors. Our main objective is to produce and disseminate credible opinion research data to support better decisions, public policy, practice and advocacy in sub-Saharan Africa. We were established on the belief that citizens’ participation in democratic governance can deepen the democratic process, strengthen public institutions and promote social inclusion and cohesion across Africa.