The Republic Of Mali And Political Instability: Context And Issues 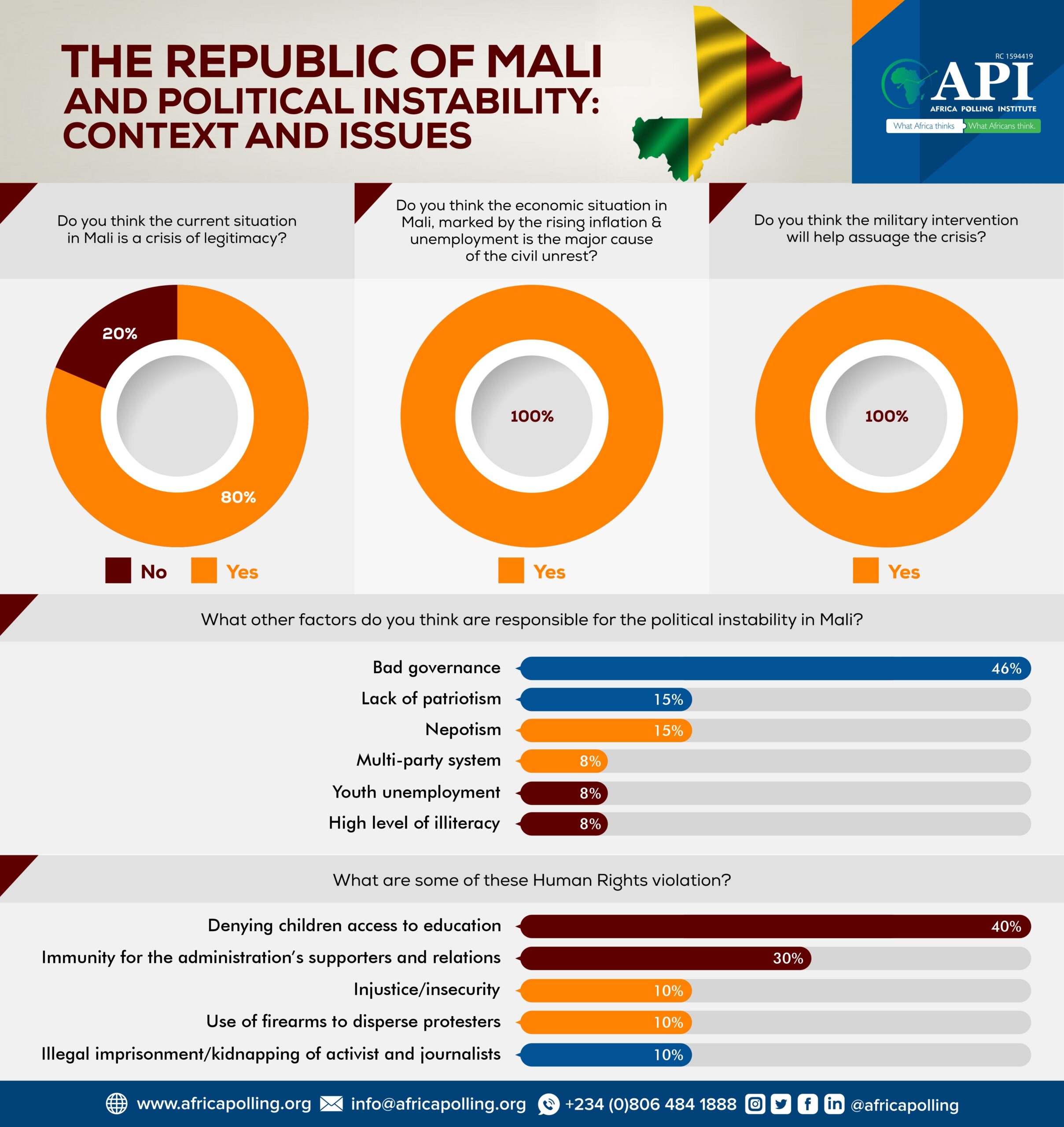 Abuja, Nigeria, December 1, 2020 – A new Working Paper: African State Series- 2020-011-001 prepared by Abuja-based opinion research think-tank, Africa Polling Institute (API), on the current political instability in the Republic of Mali has highlighted bad governance, lack of patriotism, nepotism, massive youth unemployment, socio-economic neglect of the Tuaregs and high level of illiteracy amongst others, as major crisis of legitimacy fueling the political imbroglio in the country. The working paper titled- “The Republic of Mali and Political Instability: Context and Issues” is an attempt at providing insights into the decade long political crisis in Mali from the perspective of Malian youth influencers and opinion leaders. Findings from the study showed that 8 in 10 Malians (80%) believe the current political situation in the country is a crisis of legitimacy which they believe the recent military intervention (100%) in the country will help ameliorate the seemingly intractable tension in the short-term as prospects for restoration of peace and stability are underway.

The study deployed a mixed method as relevant extant literature are triangulated with submissions from Key Informant Interviewees (KII) and Focus Group Discussants (FGD) who were purposively selected from the pool of youth influencers whose perception about the Mali predicament is thought to be first-hand in articulating API’s position of the situation. Stakeholders engaged are youth influencers and young leaders who are experts and professionals engaging daily in providing economic, political, social, business and Information & Communication Technology-based services. The interface was made through the expertise of our Mali based non-resident research associates who administered the KIIs and FGDs in the month of October, 2020. While the scope of the study covers the outlook of the crises in recent times as indicated by extant literature, especially in 2020, historical insights into the root cause of the Malian conflicts were probed further.

This view was buttressed by a Key informant who submitted that: “Yes, the crises in Mali is a crisis of legitimacy somehow because there is a lack of trust between the authorities and the population as citizens no more trust the government and if there is no trust, nothing can be done together making it difficult for the country to experience political stability.”

Factors Responsible for the Political Instability in Mali

An excerpt from the FGD further emphasized the above factors as follows: “We have a political crisis that we have gone through which is triggered by bad governance and records of corruption fully in place in the ousted regime of Ibrahim Boubakar Keita (IBK). Additionally, the difficulties in the education sector also pushed teachers to embark on industrial action. This factor has made students and youth to not only demonstrate against bad educational policies and unemployment but also armed banditry. All of these have led to the current civil unrest in our country.”

Regarding the forms of human rights violation experienced since the crisis began, 40% of the respondents expressed the fact that children especially have been denied access to education. This was followed by 30% who said immunity cover were extended to relations and supporters of the administration. Other forms of rights violation highlighted by respondents include: injustice / insecurity (10%), use of firearms on protesters (10%), and illegal imprisonment / kidnapping of activists and journalists (10%).

Additionally, the study asked respondents whether they believe the current economic situation in Mali, marked by the rising inflation and unemployment is the major cause of the civil unrest. Interestingly, all of the respondents interviewed affirmed that the rising inflation and unemployment in the country are major causes of the civil unrest.

Corroborating this view, a youth influencer interviewed submitted that “it is true that unemployment, poverty inflation are the major causes of the civil unrest in Mali because most young people who finished their studies in the universities can’t get jobs, whilst terrorist groups are around proposing and enticing them with lots of money as bait to get enlisted into their groups. Hence, poverty and unemployment are part of the causes of the civil unrest in Mali.”

Lastly, the study asked respondents whether they believe the intervention by the military will help assuage the crisis. Findings revealed an overwhelming consensus of the notion of the military incursion heralding momentary succuor to the situation as all the respondents engaged approved of the move.

This working paper strongly recognize that the solution to the Mali political impasse is a function of the unalloyed patriotism and call for unity amongst the citizens themselves. Malians are thus encouraged to design home-grown templates for social inclusion and social protection strategies. Inclusion is necessary in redefining the pathways for peace as some groups like the Tuaregs have decried age long neglect by the government overtime. Again, international humanitarian interventions have already gone far in ensuring that peace deals, justice and stability happen in no distant time. While this is commendable, it is quite instructive to note that there have been accusations of partiality in terms of support-base provided by conflict stakeholders. It is recommended here that vested interests of peace brokers should be shielded to allow for the ultimate actualization of the needs of the Malians. It is thus suggested that creating conditions to allow Malians to look after their own situation should be the primary strategy. Without creating such conditions, repressive anti-terrorism strategies can lead to further radicalization, especially among young people that are increasingly faced with rapid population growth and a lack of economic opportunities, particularly in the northern part of the country. The challenge is to come up with solutions that go beyond the short-term political commitments and head towards sustainable change. This means providing Malians with a stable income, food, equal access to services like education, healthcare and a transparent, accountable system of political representation.